This month Games Talk will be about Mobile Frame Zero: Rapid Attack is a squad-level wargame. It puts players in command of a group of mech vehicles, called Frames, which are fast and hard-hitting, but physically vulnerable and reliant on skillful manoeuvring. The game is designed to be nail bitingly tense. Battles are asymmetrical and inherently fought over objectives during the course of an unknown number of turns. Scores, which are inversely proportionate to the mechanical effectiveness of your company, go down when you lose a Frame or station and go up when you capture another player’s station.

Frames only take damage to their systems, with the target player choosing which systems are lost. This means careful system management from the players, as well as tactical skills, as even dumb luck pot-shots can change a team’s fortune.
The game also integrates the military principle of ‘friction’ in its spotting system. A Frame fighting by itself is unlikely to do any serious damage. But if they stay in communication, as well as moving and firing their weapons at the enemy, with either their own company or their temporarily allied opponents their effectiveness jumps dramatically !
Beginning of Mobile Frame Zero

Mobile Frame Zero began life back in 2002. Rather than being developed from a core concept, the game grew organically from a need for a rule set. “It actually came out of Vincent and his brother wishing there was a way to represent giant robot fights.” Joshua Newman explained, “They spontaneously adapted Vincent’s Otherkind dice to the purpose.

One of Vincent’s kids called the town that the robots were fighting in ‘Mechaton’ — the town of mecha — and it carried that name for years.” This basic game, Mechaton, was gradually built on.

Vincent introduced the game to Joshua Newman, who was working on another game system at the time. Many of the mechanics of this game were absorbed into Mechaton, and introduced elements such as the Doomsday Clock, objectives and the point system. Mechaton was made available to the public and in short time had gained a small but dedicated following. 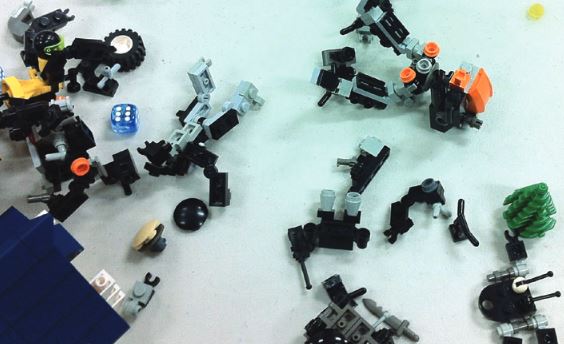 By 2010 Vincent and Joshua had started to consider a new edition of the game that integrated some rule refinements. It was all systems go, but then, a spanner in the works.

Out of the blue, Vincent got a politely but forcefully worded request from R. Talsorian Games asking him to stop selling under the Mechaton name, since it was close to the name of one of their older products.” Said Joshua “When that happened, we were kind of miffed. There were several dozen fans from around the world who had been playing for years, and we liked the game a lot. We didn’t want to lose those guys. Some of them had contributed hugely, like Sydney Freedberg, who writes for the Pentagon about military theory.” As Joshua saw it, this was an opportunity to take the game to another level. He told Vincent “If we’re going to change this, we’ll have to go big. We don’t want to abandon these folks who have helped us make this good.”

Vincent was working on his role play game Apocalypse World by this point, so Joshua was given the publishing rights to the Mechaton game rules. Soren Roberts was brought in to design the mobile frames, and also contributed to writing the new setting with Joshua. 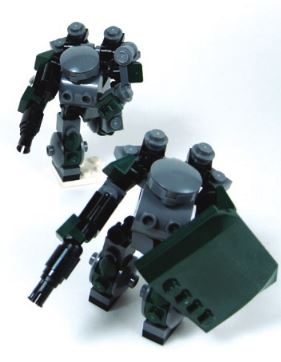 The updated rules and new game world, now under the name Mobile Frame Zero, were trailed at the Metatopia Game Design Convention in Morristown, New Jersey USA. This helped to reintroduce the game, as well as build confidence in Joshua and Soren that the changes and additions they had made worked. Joshua elaborated on this process “we’d tried out our newer rules a bunch of times, so we were confident with our changes — both those of the last 10 years and of the six months since taking over from Vincent.

Mobile Frame Zero hit Kickstarter shortly after. Initially the goal was to raise US$9000, with a projected 500 backers. When the Kickstarter closed, the project had netted nine times the initial requirement, as well as five times the number of backers expected. This meant that 3000 rule books would be produced, with much of the additional money going into printing more copies.

How to start playing ?

There are a number of ways to start playing Mobile Frame Zero. A PDF that contains the rules, background, instructions for six frames and a whole lot more is available on the Mobile Frame Zero website. Joshua provided some more details: “I’m asking players to give me ten bucks to get the full book, but as it is Creative Commons, you can download a new copy, copy your rules for your friends, or even make your own houseruled edition to share with your gaming club.” Everything that is available for download can also be bought in hard copy as a printed book.

“As a book designer, this is how I design first,” explained Joshua “it’s what will be the most beautiful way to play with it.” These two options are perfect if you already have a collection of LEGO pieces, or intent to utilize something else as your play pieces. What if you are starting from scratch, though? “Some players might need to get LEGO bricks to play, too.” Said Joshua “To help players, Soren’s carefully designed the Mobile Frame Garage: a list of 120 of LEGO’s tiniest pieces that work really well for building a mobile frame. Paul Janssen’s Bricklink shop,

The Missing Brick, is setting up to sell 5-Frame company kits based on the Mobile Frame Garage and is already fulfilling many of Kickstarter’s 600- piece Garages.” However, creating a kit from another company’s product has proven to be quite a challenge. “I can’t even express in words how hard it’s been.” explained Joshua “Without Paul’s help, it just wouldn’t be possible.

Bricklink is an amazing power to have, but it requires a level of mastery I lack. I bought a couple of Garage Kits myself just so I didn’t have to go hunting for a lot of the pieces. “Paul, however, has a mastery of the international LEGO market that borders on the supernatural. He knows who has what for how much and is doing all players a great service by collecting them in one place.

This site uses Akismet to reduce spam. Learn how your comment data is processed.