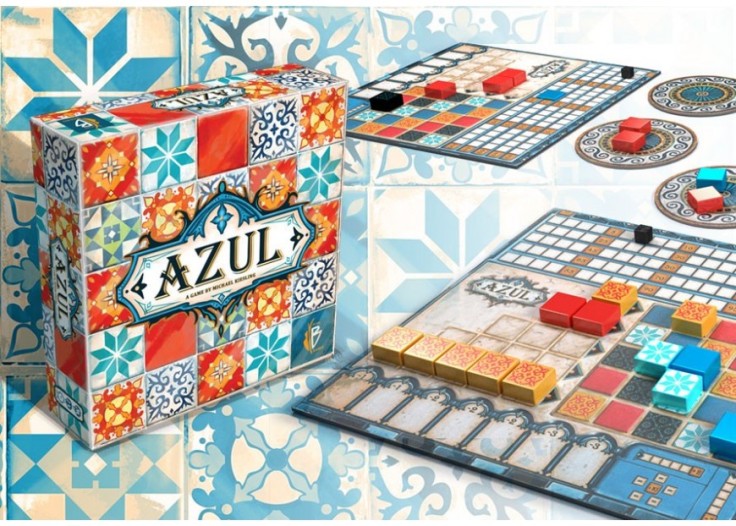 Last Saturday we had our first AZUL Tournament in collaboration with Outpost Brussels.Tony who is part of the organizers took the lead to organize with the help of a few other organizers (François, Dominique – thanks !) some warmup sessions followed by the actual tournament on Saturday 14 April 2018.

Azul is being played a lot at the Outpost Center at the moment and is overall popular across the world (currently holding the 1st spot on the Boardgamegeek ranking for BOTH the abstract and family category – ranked #50 in the overall ranking).

Introduced by the Moors, azulejos (originally white and blue ceramic tiles) were fully embraced by the Portuguese when their king Manuel I, on a visit to the Alhambra palace in Southern Spain, was mesmerized by the stunning beauty of the Moorish decorative tiles. The king, awestruck by the interior beauty of the Alhambra, immediately ordered that his own palace in Portugal be decorated with similar wall tiles. As a tile-laying artist, each player has been challenged to embellish the walls of the Royal Palace of Evora.

To make this tournament more interesting for everyone, we got prizes for the tournament winner: discount vouchers from Outpost and first player tokens from Asmodee Belgium (visit their Facebook page).

So, for all those players, here’s a chance to test your Azul strategy against everyone else. There will be prizes for the top three players. The tournament is for players who know how to play Azul (hence the reason we had multiple “warmup” sessions in the last months). There will be no explanation of the rules before the tournament begins, although you do have plenty of time to find out and try the game beforehand. 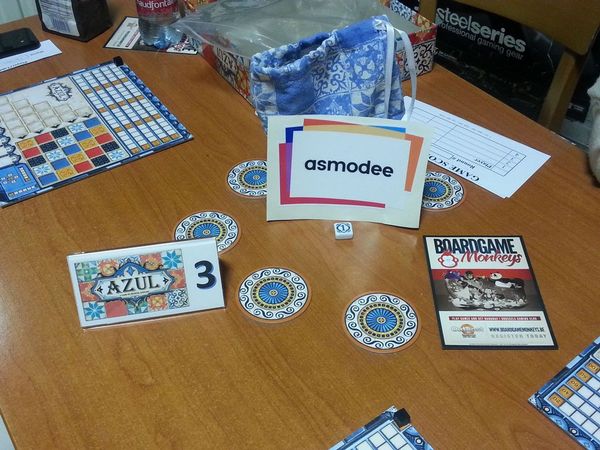 With everything set up for the tournament (I got reported that there were great table settings printed by Tony who mastered the event), players could battle to grap a spot on the podium and win a prize ! Below are our winners of the loot of the day ! Francisco won the 1st place, followed by Colton and François.

Overall everyone had a great time and tournament experience ! Thanks all participants and big shout out for the organization of this tournament to everyone (thanks Tony) and of course to Outpost and Asmodee to make this possible !

Tony shared his feedback on from an Organizer perspective. Read on:

Azul Tournament Report 13 players turned up for the tournament, 12 from Boardgame Monkeys and 1 via the facebook ad from Outpost. We got started on time (12:00) which meant unfortunately one other from the facebook ad was too late. Prizes were supplied by the Outpost Center, being -30%, -20% and -10% vouchers for the first three players. An extra surprise was secured by Do, when Asmodee donated new “#1 tiles”, for each of the top four players.

Four preliminary rounds of games were played, 3×3-players and 1×4-players, with a final round of games to determine the final placings. Lord François and Colton got off to brilliant starts, winning their first two games and leading the way. François then won his third game, beating Colton along the way, and a fast improving Francisco won as well to make it two wins after three games. In game 4 Francisco won his third in a row, tieing for the win with Colton, whilst François finished fourth of four in his final game. But all three were guaranteed their place at the final table. As the fourth set of games finished Oliver was in position to François’ failure to win and Cedric doing just that meant Cedric just took that last place by virtue of his two wins over Oliver’s one. 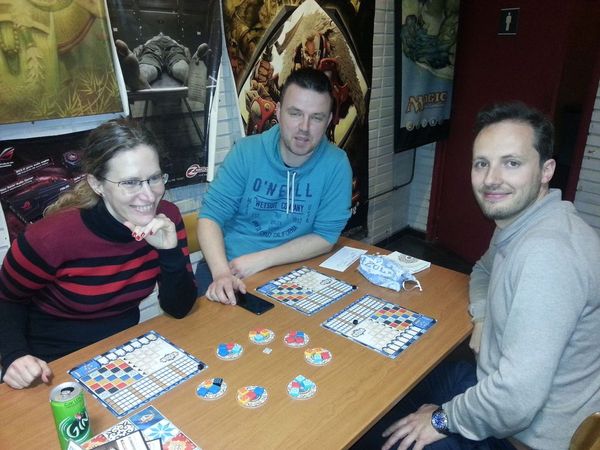 At the top table Francisco won by 7 points (79-72) from Colton, with François a distant third. Laetitia won 5th place, also with a 7 point victory over Oliver. At the third table, Tony won 8th place with the highest single total of the day, 99 points. And on table four Samuel won with 75 points. 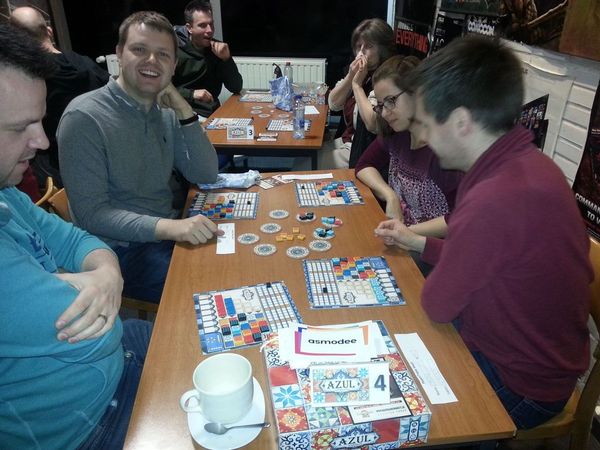 Some details of note: Francisco actually won four of his five games after a slow start, and thoroughly deserved to be called Azul champion. Samuel had the highest aggregate game score after the initial four rounds with 292 points, an average of 73. But he featured in high scoring games throughout and finished third in each of his first three games. Do started with the lowest score of the day, 28, but then quickly improved to win 7th place. And finally, Do presented “Yours Truly” with an extra #1 Tile from Asmodee …….anyone who has played Azul with me will know why 🙂

I think it was a big success overall – we even got finished on time. Thanks to everyone who took part, and big thanks to Outpost and Asmodee for the prizes.

This site uses Akismet to reduce spam. Learn how your comment data is processed.